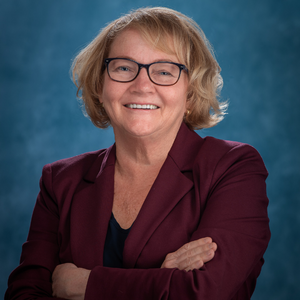 Dr. Ryslinge took the helm at Oregon Coast Community College in July 2014. At the time, the 27-year-old college occupied new facilities that had been completed just five years before, but the College lacked independent accreditation. Upon being named president, Ryslinge was charged by the Board of Education with leading OCCC to independence. In the ensuing five and one-half years, the College submitted a series of reports to the NWCCU, including three self-evaluation documents, and hosted two separate accreditation team visits. Ultimately, the College was granted independent accreditation in February of 2020, thus launching its first year as a fully independent institution in the face of a global pandemic.

Dr. Ryslinge is a dynamic community college leader with more than twenty years of community college experience and progressive leadership in academic affairs and instruction, first in California and now in Oregon. She has also taught (full‐time and adjunct) in the subjects of psychology, management and leadership. Previous leadership positions were interim campus presidencies at two large campuses of Portland Community College (PCC), Dean of Instruction for PCC, and Dean of Academic Services and Economic Development for Las Positas College in Livermore, California. She enjoys working with the external community to advance the role and position of the community college and has been very successful in that capacity developing important relationships and resources.