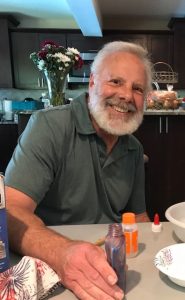 Foundation Board President-Elect Dr. Steven Spector, Steve as he prefers to be called, has served on the Board since 2018. I am honored to work with such a genuinely kind soul. Steve willingly gives of his time, volunteering on the Pearls and Scholarship Committees; talent always with a warm smile and caring demeanor; and treasure to OCCC although he is shy about asking the same of others. Allow me to introduce to you, Steve Spector.

Some of my fondest memories as a child were spending time with my aunt, uncle and cousin in Long Beach, New York. I was two years old when my parents, sister and I moved from New York to Washington, D.C. Being the oldest of four, life at home was filled with chores. Visiting in Long Beach was a nice respite. Four blocks away on one side was the bay and six blocks away on the other side were the beach and boardwalk.

All through junior high, I attended a Jewish day school; half the day was devoted to Jewish/Hebrew studies while the other half was a traditional public school curriculum. After high school in Washington, D.C., I was fortunate to receive a full scholarship to George Washington University (GWU) majoring in economics and math. I performed well enough on the GRE to secure a fellowship to the University of Pennsylvania Wharton School of Business studying econometrics but soon became disillusioned. Spending time and energy on maximizing material wealth didn’t seem compatible with humanity to me. I dropped out and looked for a career path.

About the same time, I began to read articles in the field of social psychology and was inspired by Kenneth Clark, psychologist and civil rights activist, who was the first Black president of the American Psychological Association. He and his wife, Mamie Phipps Clark created an experiment known as “the doll test” to study the psychological effects of segregation on African American children in schools. The Brown v. Board of Education case in the Supreme Court referred to that experiment, ending school segregation; separate but equal is not equal. I applied to the doctoral program in psychology with a specialty in social psych at City University of New York and was awarded a National Science Foundation fellowship to cover tuition and expenses.

It became clear to me that I responded better to mountains and woods, rather than big city life. It was also evident that the main thing I could do in my field of study was to teach. I was encouraged to apply for a position in the Virginia mountains as a psychotherapist for which I did not feel particularly qualified. One of the interviewers was Dr. Ben Nagler who had studied with Freud. Ben said, “Ninety percent of good therapy is compassionate listening.”   After two days of interviews, I was hired as a therapist in the mental health clinic and began to learn on the job.

My first wife, two-year-old son and I moved to the mountains just ten minutes away from the Appalachian Trail. We were there for ten years, a second son, and through a divorce.

One year later, I met Judy at a group therapy workshop. She was in a similar field. We had conferred a few times about mutual clients but had never met. As she walked by at the workshop, I thought she was the most beautiful woman I had ever seen. Looking at my name tag, she introduced herself. All I could do was look up within myself and say, “Thank you, God.”

In the 1980’s, we moved west to spend time closer to Judy’s family. I had a position in Klamath Falls as the Psychologist for Klamath County Mental Health. After two years a colleague invited me to apply for the position of manager of adult services and crisis services at Lincoln County Mental Health. After five years there, I joined a private practice in Newport for two years, before being recruited to work with a team of mental health professionals through the Linn-Benton-Lincoln Education Service District (ESD). We delivered counseling to students, provided suicide intervention and crisis management in Lincoln County schools, K-12.

We saw an increase in troubled, damaged children and a greater attrition rate largely due to families moving frequently. They would come to the Oregon coast, stay for a few months, but because of a lack of housing and jobs, would have to move again. Students had little chance of establishing friendships. In addition, funding was cut for programs that appealed to kids. I was with ESD for thirteen years and retired.

As a retiree, I continue to indulge in my personal passions: searching for wildflowers, ‘magical’ creeks and reading science fiction, mysteries, and historical fiction.

In 2018 Chris Boyle invited me to an informal gathering to acquaint the public with OCCC. The enthusiasm and passion I saw in the two students and OCCC President Birgitte Ryslinge were moving and motivated me to apply to join the Foundation Board.

OCCC gives students an opportunity to launch into a new phase of their life, one of their own choosing. To OCCC students, I would advise to choose what you want to do. To paraphrase Billy Joel, “Don’t be a victim of circumstance.”

To potential donors, I say that it is really exciting to be involved in something so rewarding and to share in the enthusiasm of students and a very supportive staff.

Knowing Steve, he would add to potential donors, “Don’t squander the opportunity to make a difference.”  Steve and Judy are blessed with four children between them, eight grandchildren and one great grand kiddo on the way.

Thank you, Steve and thank you, Judy! 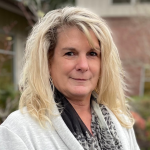